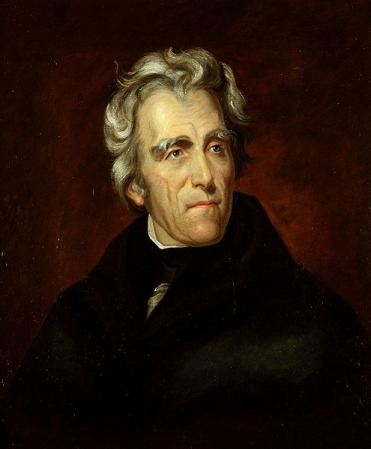 Was a soldier, lawyer, state representative, and a senator

Helped to make the office of President a more responsible, strong position

In 1828, Jackson's opponents called him a jackass. Thanks to cartoonist Thomas Nast, the donkey became a symbol of the Democratic Party.

Andrew Jackson's birthplace in South Carolina is marked with a marker on the grounds.  It was placed by the Daughters of the American Revolution.  The site is now called "Andrew Jackson State Park", and it includes a museum about him.

Andrew Jackson's birthplace in North Carolina is marked with a gray marker, also placed by the Daughters of the American Revolution.  It is named "McKamie Farmhouse".
* Disputed

This is Andrew Jackson's other home, it is called "The Hermitage".  He is buried on this Estate.

Andrew Jackson died on June 8, 1845.  He was buried in the garden next to Rachel Jackson.

Standing directly north of the White House on Lafayette Square are many flowerbeds, along with 2 statues.  One statue is of Marquis de Lafayette, the other of Andrew Jackson.

A statue of him was erected in Jackson Square.

On the grounds of the Tennessee State Capitol, the same location where Polk's tomb is, is a statue of Jackson.

In downtown Jacksonville is located a statue of Jackson.  All 4 of these statues are identical.

On the grounds of the North Carolina State Capitol is another statue of Jackson, it is close to a statue of James Knox Polk.

This includes a replica of his parent's home.